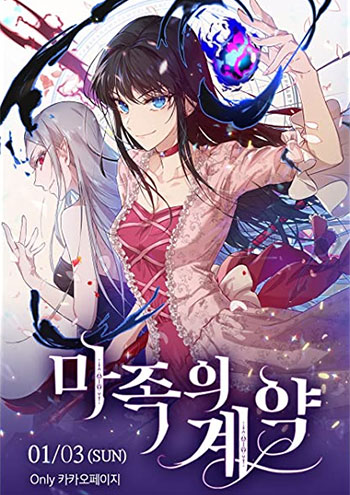 The Demonic Contract Manhwa also known as (AKA) “Asmodian’s Contract / Contract of the Ma People / Perjanjian Bangsa Iblis / 마족의 계약”. This OnGoing webtoon was released on 2021. The story was written by Cloud Light,Ji-Seon Yun,Kim Yoon-Kyung and illustrations by Yeoul. The Demonic Contract webtoon is about Drama, Fantasy, Romance, Shoujo, Supernatural story.

The Demonic Contract Manhwa – Summary
The demon lord’s daughter Yurisina was living a normal demon’s life when she was summoned by a human who was about to die. Not just any human, but the Paedin kingdom’s first princess Marianne. As Yurisina lives on in her body instead, Marianne requests that Yurisina takes revenge on the person who poisoned her.